SALEM TWP. – A nearly $1 billion natural gas power plant project being constructed in Salem Twp. is more than halfway complete and is expected to be finished in May of next year, said Ross D. Ain, executive vice president of Caithness Energy.

Ain provided an update Thursday about progress on construction of the Moxie Freedom Generating Station after presenting the Salem Twp. Volunteer Fire Department with a $10,000 donation.

“We expect to be fully commercial next May, generating over 1,000 megawatts of electricity,” Ain said. “At this point, we are on schedule. We believe we are going to hit the May date.”

Gemma Power Systems is building the natural gas power plant on a 150-acre parcel on Mingle Inn Road off U.S. Route 11 and 667 workers are involved in the construction, Ain said.

Twenty-three of 24 permanent employees who will work at the plant have already been hired. Twenty-one are already on site beginning training, he said.

The Moxie Freedom Generating Station is being built about three miles away from the Susquehanna nuclear power plant.

Across the country, a boom in natural gas has been threatening the viability of the nation’s 61 nuclear power plants, including the one here that employs 1,000 full-time workers and contributes millions of dollars to the local tax base. 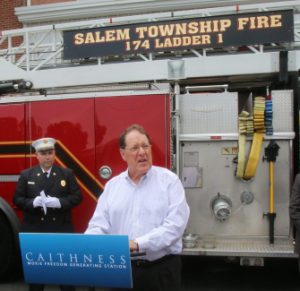 Ain did not want to comment specifically about the nuclear power plant, but he said the new plant will use natural gas from Pennsylvania. By 2030, he said 40 percent of natural gas in the United States will come out of Pennsylvania.

“It’s unbelievable and nobody predicted it 10 years ago,” Ain said. “We’re delighted to be helping that industry by efficiently and cleanly making that gas into electricity to serve this region.”

“Texas has been known for a long time as the energy location of the United States. Do you know who its competitor is? It’s Pennsylvania,” Gordner said. “We are now competing with Texas as the energy hub for the country and it is because of natural gas and that opportunity.”

It followed a $5,000 donation the company presented to the volunteer fire company last year.

“When we broke ground 20 months ago, we made a commitment to be a good neighbor and a strong community partner,” he said.

“We’re reaping the rewards when it comes to jobs and the economic impact it’s having on the community and it’s so much good stuff. It’s good news,” Toohil said.