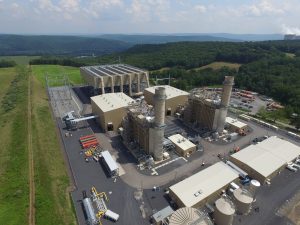 The Caithness Moxie Freedom Generating Station in Salem Township, Luzerne County, Pennsylvania, is online and selling power into the markets of PJM Interconnection, a regional transmission organization that coordinates the movement of wholesale electricity in thirteen Northeast and Mid-Atlantic states.

Using state-of-the-art technology, the plant is the highest efficiency user of natural gas in the region. The dry-cooling technology used by the plant means that water usage is 95 percent lower than a plant of the same size using traditional cooling technology. A 1,050-megawatt, highly efficient combined cycle plant such as Freedom reduces CO2 emissions by 3.2 million tons per year compared to the older steam plants.

During construction, employment peaked at more than 650 workers per day at the site. Overall, it took more than 2 million man-hours to safely complete construction while remaining vigilant to the highest safety and environmental standards.

The Freedom Generating Station transitioned to commercial operation in September 2018.

Moxie Energy led development of the project from initial concept, working with all stakeholders – including federal, state and local officials, community members and relevant agencies – to obtain all required approvals for the project. Caithness Energy led construction and is managing operations of the facility.

The Freedom team built, commissioned and in March 2017 turned over to PPL EU the 500-kilovolt (kV) Shickshinny switchyard facilities, which are tied into the Susquehanna 500-kV transmission line — a critical step in the development process.

The Freedom Generating Station is the latest addition to Caithness Energy’s diverse portfolio, which has included natural gas, wind, solar and geothermal power generation projects. In addition to Freedom, Caithness developed and constructed the Shepherds Flat Wind Farm, one of the world’s largest wind-energy facilities. Located in eastern Oregon, the Shepherds Flat Wind Farm began commercial operations in September 2012 and is comprised of three separate projects with a combined generation output of 845 MW. Caithness also developed and constructed the Caithness Long Island Energy Center, a 350-MW gas-fired facility that has been providing Long Island with reliable power since 2009. Built on time and on budget, the CLIEC is one of the cleanest and most water-conserving power plants on Long Island.